Help Save Phantom, the Escape Pittie!

**UPDATE: July 13, 2013. A foster home is DESPERATELY needed for Phantom! We know the shelter will not hold him forever and we need to get him out NOW. We expect to pull him either saturday or monday, but he has nowhere to go after he gets out. Help us find a foster for Phantom! We will help with his training and rehabilitation, we just need a place for him to stay for 1-2 weeks so he can recuperate after his ordeal and pull himself together. This poor dog has been through so much and he will only get worse the longer he is in the shelter. If you are willing and able to foster him, please email me ASAP at JessBePaws@gmail.com. Thank you!

Phantom the Escape Pittie
Phantom is a wonderful 7 year old Pit Bull who unfortunately is in quite a jam. The trainers here at Dog Sense had been working with Phantom on his obedience skills for a few months and he was making excellent progress when he was taken by Animal Control on June 5th. He is extremely friendly, energetic, smart as a whip and learns his commands flawlessly. He is a pleasure to be around and has never shown any signs of aggression to anyone. He loves to bark, but his bark sounds worse than his lick. I have walked him with my own dogs and he play bows and gets all wiggly-puppy to encourage them to play. He is a great dog and it is unfortunate that he is in this circumstance, but we believe in him so much that we are doing everything we can for him.

ABOUT PHANTOM (note: these incidences took place before we started training him):
Phantom is a 7 year old Pit Bull who was rescued from the streets after Hurricane Katrina. A rescue picked him up and gave him to a woman named Janet to foster and care for after being diagnosed with stage 4 Heart Worm disease. He recovered and Janet decided to adopt him. Several years later Janet, Phantom and her other dog Shadow moved to a home in southern california.

On June 5th Phantom was taken from his home by LA Animal Control because he kept escaping from his yard. After 5 escapes and 2 minor scuffles with neighbors dogs (as a professional trainer, I believe these were NOT aggressive, but rather more of a case of the other dogs being under-socialized, Phantom being too excited, and the owners not understanding canine body language), his owner was forced to relinquish him. Fortunately, by heavy social media networking, we were able to stop his euthanasia, but he was given a Potentially Dangerous Dog title. The judge was very kind though and understood that this title may inhibit him from being adopted, so the restrictions placed on him were reduced to just wearing a collar and leash in public and his new owners' yard must be escape proof. Phantom is a sweet, sweet boy and does not deserve this title, and I know from working with him that he is NOT aggressive. His dog-dog interactions are impeccable, and he just wants to receive affection. The Non-Profit rescue organization I work for, has agreed to pull him from Downey Animal Shelter, where he has been for almost two months now, but here is where things get sticky.

When I went to pull him earlier this week, his paperwork wasn't ready yet but I was able to see him for a behavioral assessment, and what I saw was heartbreaking. Phantom is so terrified from being in the shelter that he has nearly shut down. He was barely responsive, but was able to take a few treats. He whined slightly and began to shake when he saw me, but that was it. He is going to need to spend a few weeks in a loving foster home so he can pull himself together. He is highly treat motivated and loves cuddles, so I know he WILL come out of this, but the rescue I work with is not equipped to take on dogs that need long-term rehabilitation. Will you please help Phantom? We will do everything we can on our end to network him so that he finds the right home, but we feel that he would do best in the hands of a pit bull or other bully-type rescue seeing as they would attract a wider audience with a passion for pit bulls than the ones we see in our demographic. As the head trainer for the company, I will also waive all dog training fees from beginner to advanced, as well as an AKC CGC test to whoever adopts him so that he can continue his education to eventually appeal the PDD title. He needs a foster who is experienced with Pit Bulls, and an adopter who is ready and willing to take on the responsibility of owning a PDD dog (unjustly labeled of course).

He has already survived living on the streets, a hurricane, a near-fatal disease, and now loosing his home. His owner is absolutely heart broken over this. If any dog needs a second chance, it is Phantom. Please view the video I posted above. It was submitted to the court as evidence during his hearing to show that he is NOT a dangerous dog. This video shows the dog I know and love, and the dog I hope he will be again with the help of the right foster and/or rescue organization. You can compare it to the photo I took of him below on Tuesday. He is barely recognizable now. 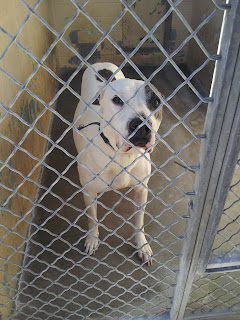 I want to thank the animal control department and the court, especially the judge, for being so kind and understanding with his owner in this case. She knows she is too elderly to properly care for him, and for the life of her she could not figure out how he was escaping. He truly is a phantom! But now he will be able to find another good home that will love him just as much as she loves him. We ask that you forward his story on so that Phantom can find a new home and that other mis-judged Pitties can also get a second chance. Thank you!